On the eighth day, Alessandro Volta
put metal coins on his tongue
and prophesied sulfurous electricity.

On the eighth day, Leucippus
considered the true nature of the void,
Teller the true capacity of the sun.

Curie was entranced by radium,
and Maxwell by luminous radiations.

On the eighth day, there were isotopes,
cloud chambers, alpha rays.

Life was vaporized in a simple test of hydrogen.

On that day outside planned creation,
God peered into the universe and was afraid for us—

Noisy children snapping berries
off a poisonous bush, racing down the street
with pointy twigs—

Didn’t I tell you to knock that off?

And burned to the nub two sons of priestly
inheritance. Before the whole assembly
were they offered up, a soothing savor.

Object lesson: this may you burn
in your copper pan, of this sinew and thigh
may you eat.

But this intoxicating notion, this 4-legged
swarming-thing—
It is polluted meat. Strange fire.

From we who desire: Poems and Torah riffs 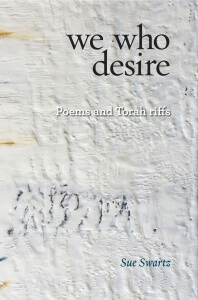