The Spiritual Reflections of a Reluctant Atheist

3 in stock (can be backordered)

Waiting for God examines the widespread spiritual ‘awakening’ of the baby-boomers and subsequent generations through a very personal (and very Jewish) lens.

How did the bomb, psychedelic drugs, the modern environmental crisis, and other factors influence a generation’s thinking about metaphysics and consciousness? What does ‘spirituality’ really mean?

Bush also turns a skeptical eye towards the atheism and humanism with which he was raised in this honest, funny memoir of religious attraction and repulsion.

“[Bush] writes about non-belief with an empathy for believers missing from the works of the New Atheists.” — New Jersey Jewish News

Lawrence Bush has been a creative force in the American Jewish community as an author, essayist, visual artist and magazine editor for more than three decades. He edits Jewish Currents,  for which he conducts a “Religion and Skepticism” column.

Bush was a speechwriter for a dozen years for Rabbi Alexander M. Schindler, the late leader of Reform Judaism in America, and also served for thirteen years as the founding editor of the magazine of the Reconstructionist movement, Reconstructionism Today. Bush’s newest book, Waiting for God: The Spiritual Explorations of a Reluctant Atheist, explores the generational factors that led baby-boomers down the path of spirituality. His 1983 historical novel, Bessie: A Novel of Love and Revolution, has also been reissued in paperback by Ben Yehuda Press.

Introduction: The Atheism that Failed

Part One: Spirituality and the Baby Boomers

121
Chapter Six: “There Is No God,
and Mordecai Kaplan is His Prophet”

Part Three: What Can I Say?

“[Bush] writes about non-belief with an empathy for believers missing from the works of the New Atheists.”
— New Jersey Jewish News

“For someone who doesn’t believe in God, Lawrence Bush sure knows a lot about religion.
“As the son of avowedly secular Jewish socialists, the brother of an Orthodox Christian, the former speechwriter for a prominent Reform rabbi and the editor of a well-respected Jewish publication, Bush is in a unique position to know so much.
“But, as he explains so eloquently, Bush has remained faithful to his atheist beliefs even though he’s far more deeply involved in religious discussions than the average person.
“I never imagined a book could force me to confront my faith in God in such a forceful way. [F]or that reason alone, this book is worth reading.”
— Jewish Literary Review

“Bush’s analysis is thoughtful and provocative, with a tendency to prod Boomers toward reason rather than to… indulge in their spirituality.”
— The Reconstructionist

“As editor of Jewish Currents magazine, Bush has a reputation for independent and unpretentious thought and dialog. Here, he continues that tradition, exploring factors that converted Woodstock-era nonbelievers into passionate spiritual seekers and aiming to surmise the psychological and cultural impact of the nuclear bomb, psychedelic drugs, environmental issues, and the synthesis of science and mysticism. In the book’s second half, Bush probes the writings of Matthew Fox (liberal Christianity), Mordecai Kaplan (Jewish reconstructionism), and Starhawk (feminist aspects of Wicca), bringing a rational skepticism to each liberal thinker’s perspective.

“Bush asks the right questions—of himself and of the reader—which leads to a deeper understanding of an individual’s relationship with God. In the end, he senses an interconnection between life and God, one that continues to pose challenges for skeptics and humanists. Libraries carrying any of Bush’s earlier titles (Bessie: A Novel of Love and Revolution) will definitely want to add this to their collections. Those having titles by Richard Dawkins, Daniel Dennett, or Christopher Hitchens will find it continues and extends these books’ arguments. For both general readers of theology and more seasoned readers looking for a convenient grappling of the issues.”
— Library Journal 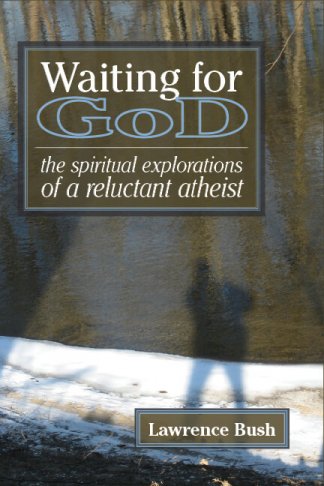