“Reb DovBer is the current authentic voice to mediate the hidden teachings of Jewish mysticism in a way that can be apprehended by the contemporary seeker. His teachings and presence resonate very deeply with those he comes in contact with. He is blessed with a brilliant mind and an open and caring heart. His teachings stimulate the mind expand the heart and reveal the soul of the Torah in a way that makes the transformation.”
Zalman Schachter-Shalomi

5 in stock (can be backordered)

Kabbalah holds the secrets to a path of conscious awareness. In this compact book, noted spiritual teacher DovBer Pinson presents 32 key concepts of Kabbalah and shows their value in opening the gates of perception.

Simply translated, Kabbalah means “that which is received.”

Looking deeper, the word Kabbalah can mean to be open and receptive, to challenge one’s own internal navigational system in order to see, hear, and be open to… more.

We must be receptive to a teaching to fully absorb it. We turn ourselves into vessels and invite within that which we wish to understand or grasp. In this way, we become receptacles, dispensaries, and a part of the Kabbalah.

We become vessels of this tradition by opening the self to a higher reality, and viewing the spirit within the matter. We raise our consciousness to the point where the Divine within all creation is revealed. As we pursue a deeper awareness, we become less ego-centered and more attuned to the deeper significance of our surroundings.

Rabbi DovBer Pinson heads the Iyyun Center in Brownstone Brooklyn. He has written several books, including Inner Rhythms: The Kabbalah of Music; Reincarnation & Judaism: The Journey of the Soul; Meditation & Judaism: Exploring Meditative Paths and Jewish Wisdom of the Afterlife.

The Purpose of Kabbalah

The Purpose of Kabbalah: Coming Full Circle
Kabbalah’s purpose is often misunderstood. A popular misconception is that the study of kabbalah results in one’s transformation into a psychic, or perhaps a clairvoyant, capable of miraculous and otherworldly abilities. In truth, the purpose in the practice of kabbalah is to perfect the self. Kabbalah offers a means of becoming a more expanded, transcendent individual, attuned to the essence of one’s deepest self.

An authentic and deep journey will come full circle and will return the practitioner to the world of the here-and-now. The Talmud tells of four sages who entered the mystical orchard (Pardes) and experienced a transcendental experience. Ben Azzai “gazed and died.” Ben Zoma “gazed and was stricken,” with insanity. Elisha Ben Avuyah “gazed and cut off his plantings,” that is, became a heretic. Rabbi Akiva “entered and exited in peace.

The orchard represents the higher spiritual realms. Rabbi Akiva was the only one amongst these great sages who was able to enter and exit the mystical orchard without being scarred. A true, well balanced master, he realized that the objective was not to over-identify with the light and fail to return—physically, as Ben Azzai did, or mentally, as Ben Zoma did. Nor, was it to feel personal release or ecstasy, as Acher intended. Rather, the goal was to explore and return with the proper wisdom to serve in the here-and-now. Rabbi Akiva “entered” and thus “exited,” whole and “in peace.”

Ultimately, the purpose of our outward journey is to bring back expansive new awareness to plant within our consciousness.

Let us open ourselves for the journey…

Fire and smoke poured from the mountain and the earth shook. The entire Community of Israel stood together in awe at the foot of Sinai as the Divine Presence thrust them into profound revelation. The thunder of awakening surged through each heart and mind as a transcendent voice spoke out: “Anochi HaShem Elokecha.” The literal translation of this thunder is, “I am The Name, your G-d.”

Where the people of Israel received this realization in an explosive flash, we can receive this truth gradually by unpacking and contemplating the mystic teachings in these three words:

The limited human ego (“I”) is called ani—composed of the Hebrew letters aleph, nun, and yud. When these letters are rearranged to aleph,yud, nun they spell ayin, “nothing,” or emptiness. We refer to the Infinite as ayin because from the finite perspective, Infinity is intangible, it is no-thing, empty of “things.” Conversely, from the perspective of the Infinite, the finite is nothing—the ego does not exist. The Infinite and finite are thus in perpetual tension and conflict.

The word anochi, referring to the Divine “I,” consists of the word ani, plus the letter kuf—symbolic of the word Keter meaning the Crown, the Ultimate. When the letters of anochi are rearranged, they spell k’ani, meaning “like an ani” or, “like an ‘I’.”

Anochi is a synonym for etzem or atzmus, meaning “Essence”—the ultimate context and totality of Reality. Essence is no-thing and every-thing, and yet it is neither nothing nor everything. Descriptive terms such as these do not apply to atzmus because any adjective, even “infinite,” is by definition a limitation.

As the ancients received the revelation of Anochi, they encountered the unlimited Divine in the absence of conflict with their limited human existence. In this revelation, there was no duality, only One-ness. Essence cannot be “experienced,” because nothing exists outside of Essence. Self-consciousness distances the mind from the experience itself.

Together, Every-thing and No-thing become a metaphor for Essence: Essence alone is not a metaphor. Every gate is a gate to Essence, and every practice is a practice of Essence. Yet, there are no gates or practices to reach Essence.

We cannot become that which we already are. The process may be simply a matter of revelation 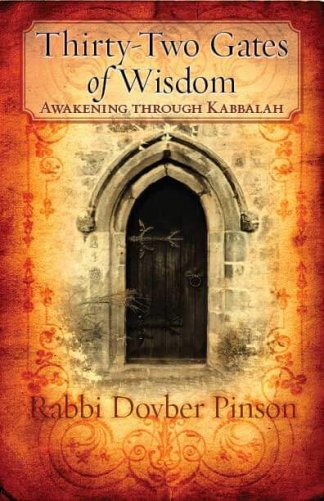 You're viewing: Thirty-Two Gates of Wisdom $9.95
Add to cart