by Aaron Freeman and Sharon Rosenzweig

Prepare to meet God (referred to by the ineffable Hebrew name YHWH) imagined as a female with green skin, a love of grilling (see Leviticus for menus) and a bloody awful temper. Moses plays her romantic lead, part of a multi-ethnic cast of characters featuring celebrities such as Barack Obama playing Joshua ( Yes, we Canaan! ). Each weekly portion gets a two-page spread. Like the original, the Comic Torah is not always suitable for children. This is a Torah experience like no other.

Houston Chronicle
Beneath the surface of the irreverence, informality and seemingly random interpretations lies a serious, personal and very contemporary struggle with the meaning of the text. (Click for full review)

Comics Alliance
Snarky, strange and hilarious as all get-out, and while it might be irreverent, it still reflects the creators’ genuine love and honest engagement with the text.

The Jewish Reporter
Anyone looking for a humorous and thought-provoking take on the parasha of the week will find themselves challenged by the authors’ irreverent look at the biblical text. The graphics make the lessons vivid, particularly those outlining the rules of sacrifices in Leviticus. Deliberate anachronisms serve as additional commentary while offering fresh insight to overfamiliar stories. While not for everyone, ‘The Comic Torah’ features a unique look at the good book.

Harold Ramis, writer, ‘Ghostbusters’
If God was a comic artist, this is what She would have drawn.

Alison Bechdel, cartoonist, ‘Dykes to Watch Out For’
Awesome!

Paul Krassner, editor, ‘The Realist’
Sacred and profane at the same time

Rob Kutner, author, ‘Apocalypse How’
Finally, a Torah reading you are guaranteed not to doze off during. Puts the ‘rash’ back in Midrash.

Publisher’s Weekly: An irreverent and occasionally amusing interpretation of sacred texts, this imagines the Jewish Lord as a green-skinned woman, one of many deities; a god whose personal failings are all too human, more akin to those of a spoiled child playing with its toys than the actions of an all-knowing, all-powerful god. Familiar stories are recast in this light; we see YHWH manipulating both Moses and Pharaoh to make them play the roles she has assigned for them and her interest in the Land of Milk and Honey–personified as an open-minded platinum-haired blonde–is not territorial but rather overtly sexual. Some people may find this imaginative approach offensive, even heretical. While theologists may be puzzled, the hyperactive, colorful art brings the story to life far more than more reverent versions. 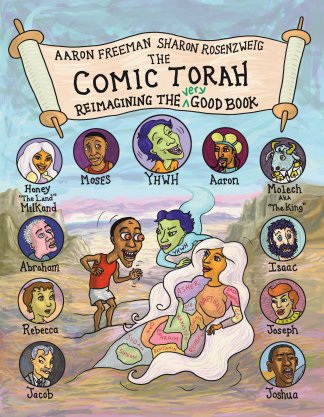