To read the work of Rabbi Aaron Samuel Tamares is to step back in time, only to realize how prescient were his views of the future. His essays and sermons, written in Hebrew between 1904 and 1931, are as relevant today as they were radical in his time.

Serving as rabbi in a small Polish town, Tamares addresses the timeless issues of ethics, morality, communal morale, and Judaism in relation to the world at large. A delegate to the Fourth World Zionist Congress in 1900, Tamares became disillusioned with political Zionism and wrote with passion about his dedication to the precepts of pacifism. Readers may not always agree with him, but they will respect his deep, thoughtful insights.

Rabbi Everett Gendler has spent decades as a trailblazing environmentalist, peace activist, and unwavering proponent of social justice.
Ordained by the Jewish Theological Seminary in 1957, Rabbi Gendler led congregations throughout Latin America before serving Jewish communities in New Jersey and Massachusetts. He served as the first Jewish chaplain at Phillips Academy Andover. He was recently awarded the Presidents’ Medallion from the Hebrew Union College-Jewish Institute of Religion “in recognition of a lifetime commitment to social justice and environmentalism.”

A collection of his writings was published in 2015 as Judaism for Universalists. 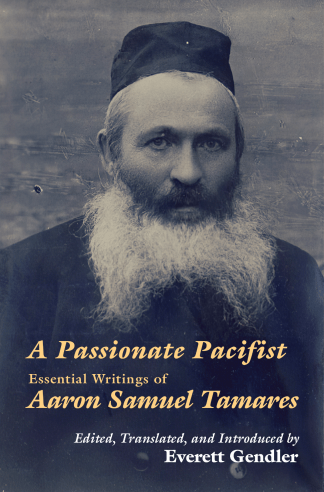 You're viewing: A Passionate Pacifist $24.95
Add to cart