Poems in the Void

Absence and Presence are the twin constants of Israeli poet Hanoch Guy-Kaner’s new poetry collection NOKADDISH: In the Void. In these poems, Guy-Kaner grapples with the God he experiences, who seems both impossibly distant and almost near enough to touch. NOKADDISH is at times mournful, and at others comedic—but above all, it’s a startlingly honest exploration of what it means to be a person living with the Absence and Presence of God.

“On Yom Kippur, it is said, Levi Yitzchak of Berditchev publicly put God on trial for breaking His own laws and failing to fulfill His obligations to the Jewish people. Rebbe Nachman of Bratslav spoke about the ‘Torah of the Void’. Several generations later, after the Khurbn, the Yiddish poet Jacob Glatstein wrote to begin a poem: “At Sinai we received the Torah / In Lublin we gave it back.” Hanoch Guy understands; he is a contemporary heir of their insights. This ‘given-back-Torah,’ a persistent luminous trace in the Void, is what Hanoch Guy receives. In him, in the poems of NOKADDISH, it begets (and recapitulates generations of) a subversive, midrashic play with meanings–specifically Jewish meanings, and then the reversal and negation of these meanings. Meanings inseparable from allusions and references to the Hebrew Bible with which the poems of NOKADDISH are redolent and resonant, and which they metamorphosize into literature. They could even become prayers. Maybe–given the Void-silence they haven within them, they already are. ‘Maybe,’ the Tikkunei Zohar comments with a wink, is the ‘personal Name’ of the Divine Presence.”
—Robert G. Margolis 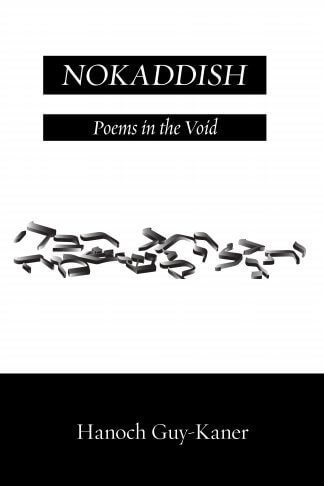