An educational agenda for liberal Zionism

12 in stock (can be backordered)

Israel education has been taking an increasing profile in the Jewish community. But is it effective? Can old messages speak to a new generation? Or is a new approach called for?

“Required reading for anyone for whom Israel and the future of the Jewish people are dear to their heart and who wants to do something about it.”
— Rabbi Dr. Donniel Hartman, president, Shalom Hartman Institute and director of its iEngage Project.

“An important addition to the discourse on Israel education.”

“I encourage all those who care about Israel to read this book. No matter where you stand, your craft as a teacher will be honed.”
— Dr. Marc N. Kramer, executive director, RAVSAK: The Jewish Community Day School Network

“A thought-provoking and timely book”

Alex Sinclair is a Jewish educational thinker, teacher and writer. He is the Director of Programs in Israel Education for the Jewish Theological Seminary, and is responsible for creating and directing Kesher Hadash, the Davidson School of JTS’s semester-in-Israel program.

He grew up in London, England, and received an MA (Oxon) from Balliol College Oxford. After receiving his PhD in Jewish Education from the Hebrew University of Jerusalem, he was for several years an assistant professor of Jewish education and chair of the education department at the Jewish Theological Seminary.

Since moving back to Israel in 2007, he has taught at the Hartman Institute, the Schechter Institute, and the Hebrew University of Jerusalem. From 2008 to 2010 he was Director of Research for MAKOM, the Israel Engagement think tank of the Jewish Agency. He has run workshops for adults on Israel education, and also has extensive teaching experience in a wide variety of K-12 contexts, including synagogue school, day school and summer camp. He has published several academic articles on Jewish education and Israel education, as well as opeds in Haaretz and the Jerusalem Post.

He lives with his family in Modiin, Israel.

Alex can be contacted at dralexsinclair@gmail.com.

Alex Sinclair brilliantly and critically addresses ones of the central challenges facing the Jewish people today: the relationship between Israel and world Jewry. In arguing for a new Israel engagement agenda founded on the amalgamation of the principles of passion, caring and anger, Alex challenges us to redefine the foundations of the relationship and sets the ground for a possible future free from paternalism, passivity and alienation. This book is required reading for anyone for whom Israel and the future of the Jewish people are dear to their heart and who wants to do something about it.
— Rabbi Dr. Donniel Hartman, president, Shalom Hartman Institute and director of its iEngage Project.

Sinclair has produced an important addition to the discourse on Israel education. He has created an intelligent guide to teaching and communicating to Jewish audiences about Israel, in a manner that is loving but frank. This is also a practical book, presenting scenarios and examples of how to apply the principles presented. I recommend it highly.
— Dr. Donald A. Sylvan, former president of JESNA (Jewish Education Service of North America)

Sinclair proposes a bold new agenda for Israel/Zionism education in the Diaspora, an educational vision that calls for a substantive shift in how many Israel educators think and teach. His ideas are well developed and carefully researched, though not without controversy. I encourage all those who care about Israel to read this book. No matter where you stand, your craft as a teacher will be honed.
— Dr. Marc N. Kramer, executive director, RAVSAK: The Jewish Community Day School Network

This is a thought-provoking and timely book. Dissatisfaction and disaffection currently cloud public sentiments in the United States and Israel toward each other.  Israel’s central support system in the U.S. are American Jews, so many being unhappy about seemingly endless building of housing in West Bank settlements and endless bloodshed by and to Gazans. Israel’s nationalist population is upset and tense with liberal American criticisms from the President to national journalists to local federation and other organizational leaders. The anxious groups ask each other the same question, Where is your soul, what happened to Jewish solidarity?

The fact is, however, that the two peoples are tightly bonded by values, indeed shared values, that stem from the Judeo-Christian moral tradition and history. The two governments share common geo-political strategies and concerns, and work closely together on a range of military armaments and intelligence and political developments in the Middle East. The two countries are serious partners. American Jewry feels connected to Jewish and democratic Israel, sharing pride in its existence, the joys of the society’s numerous achievements, and pain at its sufferings. But over the past two decades, Israel’s continuing command of lands captured in the 1967 war have come to interfere in the spiritual and practical commonalities that the two peoples share.

In his latest study, Dr. Alex Sinclair of the Jewish Theological Seminary of America addresses this contemporary situation – Israeli occupation of the West Bank and blockade of Gaza. “The challenge for liberal Zionism (in both countries),” he writes, “is how to defend Israel from vicious and unfair attacks (such as delegitimization of Israel that takes place regularly on college campuses, at the United Nations, in high-brow commentaries, in the media) while at the same time retaining the ability to be critical and troubled by aspects of Israel society and policy that we feel aggrieved at.” For those who believe in the values of Judaism, ideas of the Enlightenment, global human rights, Sinclair believes Israelis and American Jews want Jerusalem’s policies and programs toward Palestinians to live up to their potential, and this means a two-state outcome that is surely the only guarantor of an Israel that is both Jewish and democratic. This is the country’s future

To bridge differences between the two Jewish societies before the quandary grows into a chasm that is far too wide, Dr. Sinclair offers a difficult but rational educational curriculum, what he calls a “dialogical approach,” by which American Jews engage “in significant, honest, constructive conversations about and with Israel and Israelis.” Scholarship, instruction and enculturation, open and straightforward conversations, social intercourse and understanding between and among peoples are long overdue means. Remembering this is not a white or black world; the words of Amos are in order. Amos has God tell the Israelites: “You alone have I singled out of all the families of the earth – that is why I will call you to account for all your iniquities.” One more time, the higher standard is called for such as open disputation, no holds barred, and that is what Sinclair is recommending in this stimulating and worthwhile new book.

Otherwise the fate of Israel and of Jews throughout the world will not be unified in face of the growing nuclear military threat of Iran. 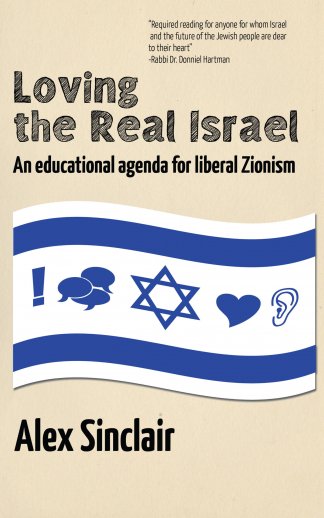 You're viewing: Loving the Real Israel $14.95
Add to cart