Life on the Fringes

An important and moving book for anyone who takes seriously the relationship between feminism and traditional religion. It belongs on every Jewish feminist bookshelf.

Part memoir, part commentary, Life on the Fringes charts a startling Jewish feminist journey both solitary and engaging. Haviva Ner-David draws us into the many facets of her life’s story: a complex modern Orthodox childhood (including a battle with anorexia); adherence to a unique combination of Jewish observances; the emergence of her feminist commitments and support of gays and lesbians in Jewish life; a serious engagement with Jewish texts — and now, studying for rabbinic ordination with an Orthodox rabbi in Israel, where Ner-David and her family have made their home.

Over time, we see Ner-David take on both traditionally male practices — donning a tallit and tefillin every day, wearing tzitzit at all times — as well as those of traditional Jewish women — covering her head, and observing in great detail the laws of niddah which govern a woman’s separation from her husband in the days surrounding her menstrual period. Her personal wrestling and her halakhic analysis help us see Jewish tradition in new, more textured ways — and lets us see new possibilities for our own lives.

Writing with warmth, vision, and passion, Ner-David unwraps her often startling package of Jewish choices, inviting readers into her many worlds, even as she challenges us to examine and deepen our own allegiances and Jewish feminist journeys. No one who takes seriously the intersection of feminism and traditional Judaism will be able to ignore this book.

The Orthodox rabbinate is all-male–but, if Haviva Ner-David has anything to say about it, it won’t be for long.

Ner-David grew up in an ordinary Modern Orthodox community in Westchester County. Her parents kept a kosher kitchen but fudged a little when they went out, eating pasta and kosher fish in non-kosher restaurants. Her mother wore a hat only in shul, despite many Orthodox Jews’ belief that married women must cover their hair all the time. In synagogue, Ner-David sat with the women, watching men chant from the Torah and lead the prayers.

In college, Ner-David began attending egalitarian Jewish services, where women were able to lead worship and sit with men. She immersed herself in Talmud study, and eventually applied to the ordination program at Yeshiva University, which ordains most of the Modern Orthodox rabbis in the US. (She was rejected.) Ner-David now lives in Israel with her three children and her husband: she covers her hair, but also wears tzitzit, the ritual fringes Jewish law requires men–but not women–to wear. And she is studying for rabbinic ordination with an Orthodox rabbi in Israel.

“Life on the Fringes,” the story of Ner-David’s reconciling Orthodox Judaism with feminism, is a must read for anyone who wants to understand contemporary Jewish life. (Beliefnet, May 2000) — From Beliefnet 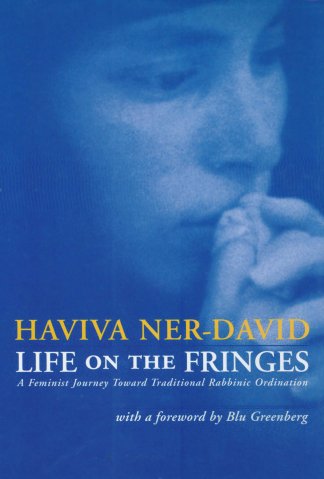