Proceedings of the First International Conference on Jewish Education

2 in stock (can be backordered)

The eleven thought-provoking papers in this volume touch upon core issues facing Jewish educators today: identity development, Jewish identification, the impact of media and Internet use on Orthodox Jewish youth, challenges in teaching universalism in a particularistic culture, teaching Judaism in a post-modern world, educational implications of the 2001 Jewish Population survey, Zionist attitudes among yeshiva students in Israel, and more.

I. From Pre-Modernity to Modernity

Jacob Schacter
On the Morality of the Patriarchs:  Must Biblical Heroes be Perfect?

Stuart Zweiter
From The Inside Looking In: Some Musings on Day School Education

Moshe Sokolow
Universalism, Particularism and “The Dignity of Difference:”
Pedagogical and Curricular Implications

II. From Modernity to Post-Modernity

Scott J. Goldberg
Students Encountering the Media and the Internet:
A Scientific Analysis of Media and Internet Exposure Amongst Youth in the Jewish Community

David J. Schnall
Perspectives for the Future of Jewish Education:
The 2001 Jewish Population Study and Beyond

Scott Goldberg is an Assistant Professor at Yeshiva University’s Azrieli Graduate School of Jewish Education and Administration, where he is also the Director of the Fanya Gottesfeld-Heller Division of Doctoral Studies. He holds a Ph.D. in Applied Psychology from New York University, an M.S.Ed. in Special Education from Bank Street College of Education in New York, and a B.A. in Jewish Studies from the University of Chicago. Dr. Goldberg is an active researcher of various educational and psychological topics including: multilingual literacy development and assessment, the connection between learning disabilities and behavior problems, the effects of media on learning and behavior, bilingual education, and special education.

Elliott Malamet lectures in the Jewish Studies Department at Queen’s University in Kingston, Ontario and head of the Jewish Thought Department at the Community Hebrew Academy of Toronto. He has done extensive work in the field of spiritual education and conducted seminars on teaching Judaism to young people in the United States, Canada, England and Israel. Dr. Malamet is currently at work on a book which examines the ethics of teenagers.
Irwin Mansdorf is a psychologist living in Israel. He is a founder of MATAN crisis intervention services in Israel and has had considerable experience in developing systems of intervention in dealing with terror and war-related stress. Dr. Mansdorf frequently writes and speaks on issues related to Israel.

David Pelcovitz is professor of education and psychology at Azrieli Graduate School of Jewish Education and Administration. He is a leading expert in family trauma, child abuse, and at-risk youth, particularly as these issues affect the Jewish community. He has conducted education and parenting conferences worldwide and is the author of numerous scholarly articles as well as two popular books, Balancing Parenting and The Parenting Path. Dr. Pelcovitz’s research in trauma counseling includes family members of September 11 terror fatalities, survivors of terrorist attacks in Israel, and tsunami victims in Indonesia.

Mark I. Rosen is a Senior Research Associate at the Cohen Center for Modern Jewish Studies at Brandeis University. His research activities on the Jewish community have explored such diverse topics as intermarriage, Reform movement outreach, financial incentives for day school parents, birthright Israel, Jewish life on college campuses, and Jewish summer camping. He has recently completed a case study on Hillel: The Foundation for Jewish Campus Life, and is conducting research on programs developed by the Jewish community to engage Jewish parents with young children. Dr. Rosen is also the author of Thank You for Being Such a Pain, a book of mussar teachings on difficult relationships.

Yisrael Rich received his Ph.D. in Educational Psychology from the University of Minnesota in 1974 after which he made aliyah and joined the School of Education at Bar Ilan University. His research focus includes teachers’ and counselors’ educational beliefs, adolescent planning of future work and family roles, and religious education. He has authored or co-edited five books and published numerous articles. Professor Rich served as Director of the Stern Institute for the Study and Advancement of Religious Education and as Chair of the Board of Directors of The Lookstein Center, both at Bar Ilan University.

Aryeh Rubin is the Director of Targum Shlishi, a foundation dedicated to providing a range of creative solutions to problems facing Jewry today, with a particular focus on education, women’s Issues, Israel and justice for Nazi war crimes. Premised on the conviction that dynamic change and adaptation have historically been crucial to a vibrant and relevant Judaism and to the survival of its people, Targum Shlishi’s initiatives are designed to stimulate the development of new ideas and innovative strategies that will enable Jewish life, its culture, and its traditions to continue to flourish.

Jacob J. Schacter is University Professor of Jewish History and Thought and Senior Scholar at the Center for the Jewish Future at Yeshiva University. He served as Dean of the Rabbi Joseph B. Soloveitchik Institute in Boston from 2000-2005, and from 1981-2000 was the Rabbi of The Jewish Center in New York City. He was the Founding Editor of The Torah u-Madda Journal, and has authored nearly fifty articles and reviews in Hebrew and English. He is also the editor of Reverence, Righteousness and Rahamanut: Essays in Memory of Rabbi Dr. Leo Jung, Jewish Tradition and The Nontraditional Jew, and Judaism’s Encounter with other Cultures: Rejection or Integration?, and co-editor of The Complete Service for the Period of Bereavement. Rabbi Dr. Schacter recently published The Lord is Righteous in All His Ways: Reflections on the Tish‘ah be-Av Kinot featuring the teachings of Rabbi Soloveitchik, and is completing a new Hebrew edition of the autobiography of Rabbi Jacob Emden.

David J. Schnall is dean of Yeshiva University’s Azrieli Graduate School of Jewish Education and Administration. After serving as professor in the department of public administration at Long Island University for 12 years, he was appointed to the Herbert Schiff Chair in Management and Administration at Yeshiva University’s Wurzweiler School of Social Work in 1991. In 1999, Dr. Schnall was awarded a Fulbright Foreign Scholarship. He also served as a U.S. State Department consultant for non-Governmental Organizations for the Government of Cyprus.

Stuart Zweiter is currently the director of the Lookstein Center for Jewish Education in the Diaspora at Bar Ilan University, a leading resource center and think tank for Jewish education. In Israel, he has also served as an instructor in Talmud in Bar-Ilan University and as a fellow at the Shalom Hartman Institute. In the U.S., he served as a principal at the Hebrew Academy of the Five Towns and Rockaway High School and at the Frisch School in Paramus, New Jersey. He has served as an educational consultant to communities throughout the world

Zvi Grumet is the Associate Educational Director of The Lookstein Center. After two decades of work in Jewish day schools in North America he made Jerusalem his home. Zvi teaches Tanakh and Jewish pedagogy at Machon Pardes and directs the Tanakh department at Yeshivat Eretz Hatzvi. Rabbi Grumet has published numerous articles both on Tanakh and educational topics, and is currently working on a Bible commentary. 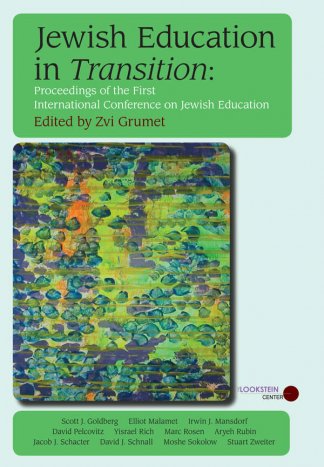 You're viewing: Jewish Education in Transition $8.00
Add to cart