How Would God Really Vote

Buy through other online book sellers

Long-time Forward columnist David Klinghoffer argued in his book How Would God Vote that “God commands you to be a conservative.”

This book begs to differ, offering deeper readings of the Torah and Talmud to make the case for voting liberal this election. Controversial issues addressed include gay marriage, abortion, drug policy, taxation, and capital punishment.

What is it about David Klinghoffer’s book, How Would God Vote? Why The Bible Commands You To be a Conservative, that demands a refutation? Why couldn’t we, two traditional Jewish men with families and jobs, leave well enough alone?Klinghoffer claims to to lay out a traditional Jewish theology of fealty to Bible Belt morality, and invites traditional Jews to embrace conservative values like useless government, restrictions on contraception and the idea that smoking is good for you.

You have to admire Klinghoffer’s ambition, trying to sell the conservative package as Torah from Sinai. The problem: It’s not, and we find intolerable the notion that the descendants of labor unionist and freedom marchers are being urged into the Moral Majority with pseudo-biblical arguments that would have made our sages wince.

We hope we have succeeded in conveying a sense that Torah–understood broadly to include rabbinic commentary–is not a conservative manifesto. Far from it. Where Klinghoffer (like Pat Robertson and company) sees the Bible as a call to wage a culture war in America, as a cudgel to pound everyone into his own image, we see the Torah as a tree of life, offering fragrant succor and a variety of enriching flavors, flowering like Aaron’s staff. 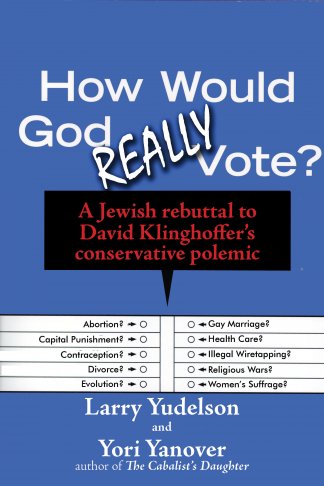 You're viewing: How Would God Really Vote $14.95
Add to cart