From the Coffee House of Jewish Dreamers

One half of this volume collects four decades of poetry of Isidore Century, until now published only in journals and chapbooks. Century’s poems recall growing up during the Depression to Yiddish immigrant parents; his coming to terms with the scars of his youth; his adult discovery of Jewish traditions and Jerusalem; and his continuing game of hide-and-seek with God. The other half of this volume, Poems of the Weekly Torah Portion, are sly imaginings of each weekly Torah portion, from Genesis through Deuteronomy.

From the Coffee House of Jewish Dreamers is the first book-length collection of Mr. Century’s poetry. Some of his work has been previously collected in three chap books, however, this will be the first publication for many of the Parsha Poems, as well as several of the Tales of Wonder and Wandering.

Isidore Century went through a life-changing experience at the age of 45. It was at that time that he began to explore his Jewish identity and to produce his poetry.

Mr. Century writes for alienated Jews like himself, who wish to remain Jews but have trouble finding a bridge between tradition and a search for spirituality — and who wander between the two.

The poems themselves are divided into two sections. One section of the book, Parsha Poems, provides a double-take on the weekly Torah portion. The other part, Tales of Wonder and Wandering, describe the poet’s early life and subsequent journeys of the body and the soul.

In combining the two books back-to-back, we are consciously hearkening back to the world of the 1960s, and publications such as the Ace Doubles line of science fiction titles (original publishers of recent Library of America author Philip K. Dick) and Mad Magazine (their election day issue from 1960 ran with two front covers).

Century, like his high-profile contemporaries Malamud and Bellow, addresses the concerns of the children of the Jewish immigrants of the early 20th century. But whereas the best-selling Jewish authors of that time dealt with the theme of `making it,’ Century’s poems, little noticed until now, are not about achieving success in the shadow of Yiddish-speaking parents, but rather trying to live with the scars they inflicted.

It was somehow less fashionable in the go-go 60s to discuss two parents who never recovered from the trauma of immigration from Europe. Century’s mother took out her anger on her sons with a cat-o’-nine-tails; and his overworked father, inspired by Communist dreams of worker solidarity, was beaten down by American frustrations of hard work and little pay. The result is raw poetry of the American Jewish immigrant experience.

In the 1970s, Century began an exploration of the national and religious aspects of his Jewish identity. In such poems as “Stumbling to Jerusalem” and “Parallel Lines Never Meet,” Century recounts his trips to Israel and wrestles with the promise of “returning” to the traditions he never experienced in his Yiddish-speaking Bronx childhood. It is a challenge that he never fully accepts, nor outright rejects. 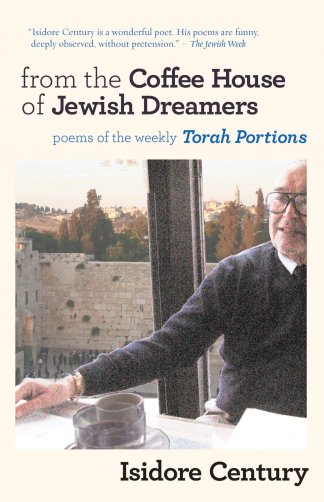 You're viewing: From the Coffee House of Jewish Dreamers $8.00
Add to cart