A Journey of Comfort and Renewal

Beside Still Waters: A Journey of Comfort and Renewal is a book for mourners, for those who will someday become mourners, and for those anticipating their own journey out of this life.  It offers liturgy both classical and contemporary for different stages along the mourner’s path, from prayers for healing (even when “cure” may be out of reach) and prayers to recite before dying, to prayers for every stage of mourning: from aninut (the time between death and burial), to shiva(the first week of mourning), to shloshim (the first month), the culmination of the first year, yahrzeit (death-anniversary) and yizkor (times of remembrance).

This volume features  traditional words alongside renewed and renewing interpretations and variations.  It contains complete liturgies for shiva accompanied by resonant new translations, evocative readings, and complete transliteration.  It also contains prayers for a variety of spiritually difficult circumstances (miscarriage, stillbirth, suicide, when there is no grave to visit, mourning an abusive relationship, and more.)

In the trans-denominational spirit of Jewish renewal, Beside Still Waters is for individuals and communities across the Jewish spiritual spectrum.

Praise for Beside Still Waters

This is a wisely constructed and genuinely beautiful book.

Beside Still Waters weaves ancient practice and new traditions into a totally approachable and readily usable companion that will help carry people through each phase of illness, death, mourning and healing, with honesty, compassion, wisdom and love.

May those who turn to this book in time of need discover that they are not as alone as they likely feel, are more supported than they may know, and that a place of genuine comfort is there for them no matter what.

Beside Still Waters is a sensitive, beautiful and contemporary re-invention of Jewish liturgy, ritual, and wisdom surrounding the end of life.  Many talented poets and liturgists have contributed to this companion to those who are grieving, healing, and accepting. Their words offer a variety of practices and beliefs, addressing a multitude of human circumstances — some that are traditionally marked and others once overlooked.  Facing into the dilemmas and mysteries of our existence, Beside Still Waters is a friend to those who mourn, those who face their own death, and those who ask questions about the meaning of life and its end. Whether you are facing a dying, a funeral, a shiva, a yahrtzeit, or the lack of a mourning structure to hold your grief, there is something for you here.

-Rabbi Jill Hammer, Author of The Jewish Book of Days: A Companion for All Seasons

There is a plethora of books, including several recent volumes, on comforting the ill and dying and their loved ones. This volume, edited by rabbi, poet and writer, Rachel Barenblat, contains teachings, readings, and services to guide the mourners.

The editor (named by The Forward in 2016 as one of America’s Most Inspiring Rabbis) has divided the text into several parts, each marking a traditional period from death (including several versions of Vidui) through the first Yahrzeit. The book includes full Mincha and Ma’ariv services, with a variety of alternative readings, including two versions of the Amida prayer. In addition, there are numerous readings and poems directed to mourners at each stage of the journey and throughout the services. Many of them are from well-known names (Jill Hammer, Zalman Schachter-Shalomi); others are from less famous rabbis and authors. Each recitation of the Kaddish has a different interpretive text by a well-known modern thinker. The result is that the process is made accessible to everyone, from observant to non-practicing Jews.

This small book is filled with wisdom, both ancient and modern. It is meant specifically for spiritual leaders, i.e., rabbis, Chevra Kadisha staff, prayer leaders, and counselors. But its readings can provide comfort for mourners at all stages of the process. It should be considered for every Jewish library; we all can use its kind words.

A review by Rabbi Jack Riemer

For most of us, prayer is a closed world. Some of us know Hebrew, and some of us know the melodies and the choreography that go with the prayers, but who among us knows how to speak to God in prayer? Most of us are fairly good at keeping up with the service, but who among us knows what it means to pour out our souls to God? And yet, ever since the day when Hannah went into the Sanctuary alone, that is what prayer means according to the Jewish tradition.

Some of the meditations in Beside Still Waters: A Journey of Comfort and Renewal, a collection of “liturgy both classical and contemporary for different stages along the mourner’s path” edited by Rabbi Rachel Barenblat, fill a real need.

Ours is a death-denying culture, in which we are taught to ignore the oncoming of death so as not to make those around us feel uncomfortable. And so it is good to have a few different versions of the Vidui here, which is the prayer that we are supposed to say before we die.

Ours is a culture that tries to repress pain and anger, and so it is good to have a prayer to say in memory of someone who has hurt us, and whom it is hard to forgive.

Ours is a society in which most of us stand before the yahrtzeit candle with no idea of what to say, and so it is good to have a meditation for this sacred moment that can help us give expression to the feelings that we have inside.

Most of us mark the end of a year of saying kaddish by hosting a breakfast for the minyan, or by promising to stay part of the group, even though we know that we won’t, and so it is good to have a prayer available in which we speak to the one for whom we have mourned and still mourn, and wish that person an ascent to a new level of holiness, and in which we promise that the one for whom we have recited kaddish is and will continue to be a part of our lives.

Space permits just a few examples of passages that spoke to me.

I have never been comfortable with the version of the first blessing in the Amidah that ends “pok’ed Sarah” – if, for no other reason, than because “pok’ed” in the Bible often means to punish. And so I am pleased to find “ezrat Sarah” in this book, instead, because it means “Sarah’s helper,” which makes a perfect parallel to “magen Avraham” (Abraham’s shield).

On Prayers of the Shema

Blessings to Zalman Schachter-Shlomi who, in the years before most of us had ever even heard of global warming or climate change, rendered the second paragraph of the Shema as a prophecy of what would happen if we continued to mistreat the Earth. Thanks to him, the “Vihaya im Shamoa,” which used to make us uncomfortable because it sounded like a threat from God who controls the rain, now speaks directly to our souls. What once seemed like a prayer that was far behind the times now reads like a prayer that is ahead of our times.

We owe much to the poet who gives us a fresh version of the “V’ahavta” blessing of the Shema in this collection. We owe whoever it was for the phrase: “with every heartbeat, with every breath, with every conscious act” simply because it is so much more alive than the “with all thy heart, with all thy soul, and with all thy might, ” which we have been saying for so long that we no longer hear it.

And how much more alive are these words:

“Teach them to your children, talk about them at work,
Whether you are tired or when you feel rested.
Let them guide the work of your hands;
Keep them in the forefront of your vision.
Do not leave them at the doorway or outside your gate.”

Let me be clear: This text is not meant to replace the standard one. On the contrary, it only works if you know the original version, so that you can understand why the poet speaks of the work of your hands, or the forefront of your vision, or of the doorway to your house, each of which echoes a passage in the traditional prayer book. It is living midrash that the author is creating here – not a substitute for the text that we grew up with.

“The sun wheels over the horizon
Like a glowing penny falling into its slot.
Day is spent, and in its place the changing moon,
The spatterdash of stars across the sky’s expanse.”

There is more in this collection, including some pages that do not touch me and some that may not move you. But try it for yourself, and you may find in it echoes of moments when the soul of the writer danced or yearned or sighed or sung or screamed with pain. And you may find some pages that will stir you to do the same. 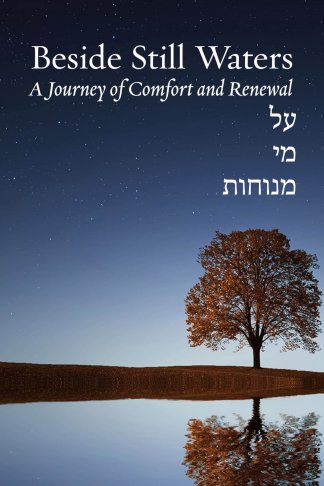