All the Holes Line Up

“Spare and precise, Berger’s poems in All the Holes Line Up gaze unflinchingly at—but also celebrate—human imperfection in its many forms.  And what a delight that Berger also includes in this collection a handful of his resonant translations of some of the great Yiddish poets.”

“What a pleasure is Zackary Sholem Berger’s thoughtful (and terrifically titled) new book, All the Holes Line Up. A physician, it’s not surprising that he uses, with great precision, medical words like saccade and vermiform, words you’ll probably have to look up (I did) and that will trigger sensations you never had before: Wow! There’s more: the generosity of lines like ‘myths bloom among mistakes,’ the details about his adopted Baltimore, the fresh translations. Stretch out your hands and catch Zack Berger’s glorious kingdom.”

—Elinor Nauen, author if Now That I Know Where I’m Going

“Berger’s translation  is funny and tight, his rhymes are as sweet as Seuss’s originals.”

“A varied, clever collection that works equally well for those poor souls who speak only English as it does for [Yiddish-speakers]”

“One of the Years Best Reads”

“The themes and the tone — whimsical, urgent, mystical, fond – are consistent throughout and display Berger’s talents as a poet, his sharp intellectual curiosity and his scholarly depth”

Is the world collapsing?
Perhaps sing
A song about your nose
That sticks out and everyone knows.

Is the city dying?
Maybe try
Blowing up balloons and popping them.
Historicizing bullets to stop them.

Are you in need of love?
What’s the need you speak of?
Cactuses extend their arms.
Electrons’ negativity has charm.

Ten Commandments Are Not Enough

Six hundred thir
teen don’t even
saturate
the terrifying space
of choice.
We can always do
something else?
Help me, compromiser
keep my
inadequate choices
at bay
not whimpering on chains
not weeping in twilight
but crouching
for a morsel 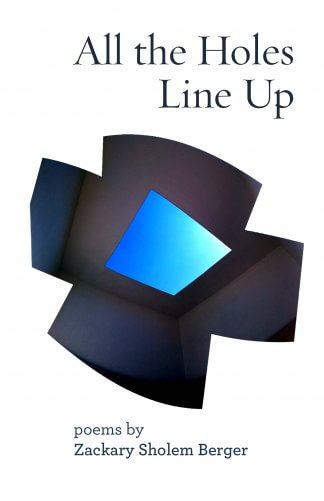